After Our Near Extinction 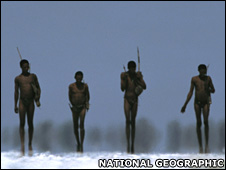 After Near Extinction, Humans Split Into Isolated Bands: "After nearly going extinct 150,000 years ago, humankind split into small groups—living in isolation for nearly a hundred thousand years before 'reuniting' and migrating out of Africa, a new gene study says.

At one point our species may have been down to as few as 2,000 individuals"

in the depths of our near-extinction, there was only maybe 2000 of us left, isolated by the climate chaos that obliterated Africa. But then Stanley Kubrick sent us a big black rock and we got all better :)