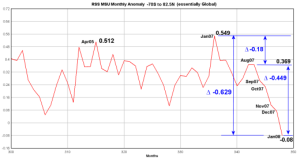 January 2008 - 4 sources say ???globally cooler??? in the past 12 months: "January 2008 was an exceptional month for our planet, with a significant cooling, especially since January 2007 started out well above normal.January 2008 capped a 12 month period of global temperature drops on all of the major well respected indicators. I have reported in the past two weeks that HadCRUT, RSS, UAH, and GISS global temperature sets all show sharp drops in the last year.Also see the recent post on what the last 10 years looks like with the same four metrics - 3 of four show a flat trendline."

Baby, it's COLD outside!