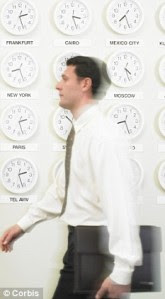 Working long hours 'puts us at higher risk of dementia': "Middle-age workers doing more than 55 hours a week have poorer mental skills, including short-term memory and ability to recall words, than those clocking up fewer than 41 hours, a study has found.The stress and exhaustion of long hours could be as bad for the brain as smoking"

Those doing the most overtime recorded lower scores in two of the five key brain function tests - reasoning and vocabulary. -- or dare I suggest that sub-standard reasoning and poor debate skills might themselves lead to the subject being hoodwinked (by themselves or others) into working those hours? As a monk once told me, "No one diagnosed of a terminal disease ever wished they'd spent more time at the office."

In what is maybe a related story on how animals may be smarter than we think, Daily Grail points out how it is your cat that spends the day lounging on your bed while its you that goes off to work.
Posted by mrG at 01:06