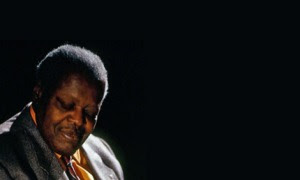 Oscar Peterson Tribute - Simply The Best - CBC Radio 2 - Concerts On Demand: One of the world's best known and influential jazz pianists, Oscar Peterson, died at the age of 82 on December 23, 2007. "Simply the Best" celebrates Mr. Peterson's life through performance, memories and highlights of his spectacular career.

I had the good fortune to meet Oscar Peterson, but only once and only very briefly. I wasn't there to interview him (I didn't have my radio show yet, only my record store and backstage passes from my Pablo Records rep) but I was welcomed backstage and "granted audience" -- it was very much like meeting royalty, and I know because I've met the Duke of Edinburgh. And it all went by so fast, I don't remember what I said or he said or much of anything; all I remember was the gold rings, the big friendly smile, and the gilded entourage that quickly swept Oscar out of there and off to some important royal function.