Can a gun have a soul? 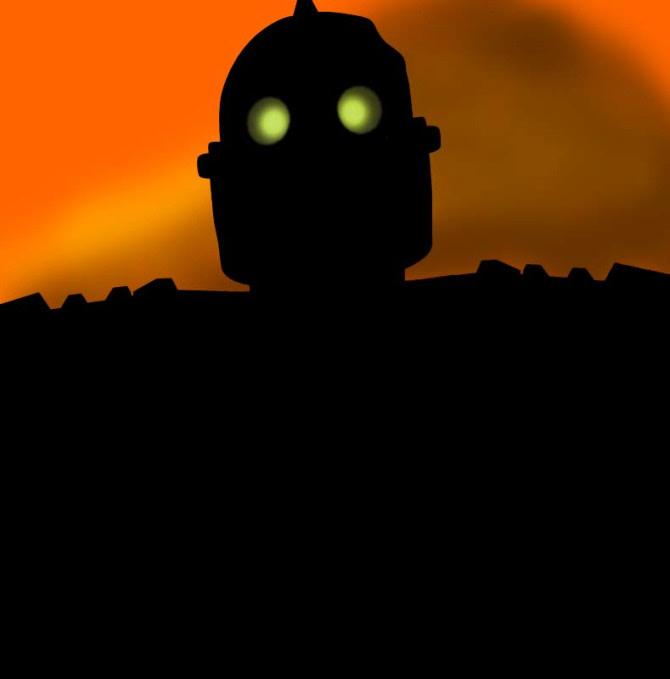 Brad Bird???s award-winning but critically ignored feature animation debut pondered how a paranoid, post-war America might react to an overwhelmingly powerful interstellar invader. A decade on, the cult classic stands as arguably the most intellectually and emotionally moving science-fiction tale in recent history.

Ten years on, Wired notes that not much has changed in the wake of the Iron Giant. If anything, the mainstream of movie making has gone from bad to worse:

For proof, look no further than G-Force, the recently released children???s CGI spy-fi fantasy starring sentient and armed guinea pigs working for the FBI.Or consider Iron Man. The 2008 movie, based on Marvel Comics??? armored war machine and released during the so-called war on terror, managed to make an arms-dealing billionaire look cool. If you think there???s going to be much more than explosions or jokes in its highly anticipated sequel, due in 2010, I???ve got a subprime mortgage to sell you.And then there???s Transformers: Revenge of the Fallen, the ultimate weaponized fantasy about gas-guzzlers that suddenly become useful for something ??? and not just carting around Megan Fox???s massive rack, either. The list goes on.

Even Harry Potter, a once innocent lad in a world of endless possibilities has become focussed on a revengeful teen who with his masters will stop at nothing to get back at the Undeniable Evil. I was so dissappointed: in the scene where Draco Malfoy is brought to tears over this terrible task put to him, I thought how wonderful would it have been had Harry found him, consoled him, pledged to work with him to free him of the illusion of his 'immutable' fate, and the two once mortal enemies could finish the series as the very best of friends. Naturally, I hear you say because you've been led to expect it, this would be absurd and would somehow 'destroy' the Potter Franchise. To that I can only counter that it is the standard plot twist of nearly every Pokemon movie! And with that I lament on how many parents I've met can forbid their children from pokemon cards yet fully fund their child through the Harry Potter's Revenge cycle held out as a far more 'decent' path in their literary tradition.

For my part, as a parent, I'll point my kids at Hogarth Hughes, ???the luckiest kid in America.???