The Kids Are Alright

In the UK, the dates are a little different but the recent drop is similar: crime rose up to the mid 1990s and then fell back down to where it started (source): 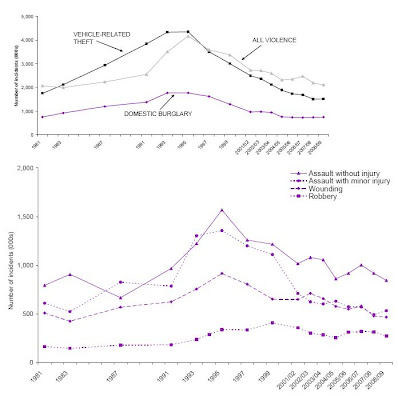 The picture is roughly the same in other industrialized countries. Bearing in mind that the vast majority of crime is committed by young people (specifically young men), this is evidence that something is not rotten in the state of today's yoof.

That's in terms of how they relate to others - what about how they feel about themselves? Have rates of mental illness increased? That's a difficult one because mental illness statistics are problematic, but in terms of the body count, suicide rates in young people have declined, albeit slightly, over the same period (source US, UK).

We don't know why crime rates fell. Everyone agrees that it happened, but everyone has their own ideas as to the cause, ranging from more abortions (the "Freakonomics theory"), to less lead pollution, to cellphones making it easier to report crimes, to... I'm sure you can make up your own. Ditto for suicide.

The point is, whatever reduced them, it's unlikely that something else was acting to increase them by any significant amount over the same period. It's possible - maybe something about 21st century life causes loads of crime and suicide, but luckily, some other mystery factor(s) reduced them even more at just the right time. But that's pretty implausible; if nothing else, Occam's razor tells us not to multiply explanatory factors unnecessarily. Which means it's implausible that the internet, video games, and the rest, are causing any significant degree of harm.

via neuroskeptic.blogspot.com
Posted by mrG at 19:12