All formations are impermanent

What a tremendous mess this is, and with it a cautionary tale for one and all on the stark reality of impermanence in the online world, an impermanence from without.  Here's how it all unfolded: 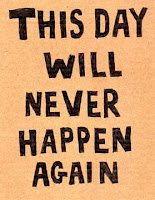 Only the online world, like the rest of tech culture, rarely fully explains its promises.  Hence this current mass of almost.  What happens first is the notion of export does not imply what we normally think of in having materials moved out of one location bound for another.  What a blog 'export' (carefully quined) really means is a transfer of the semantics ... but not necessarily the content.  Text is largely preserved, links to outside material is largely preserved (with a few skips here and there) but other content is only sometimes copied over, and sometimes not.

For the unwary, and for those who may not quite understand how the Internet works, the import to WordPress looks good: because it preserves much of the content as links, and because Posterous.com has not yet (at the time of this writing) shut its doors, many of the postings over at teledyn.wordpress.com do look fine, properly formatted, seemingly intact.  This is an illusion: the posterous hosted content will appear as gaping holes (Posterous full-dump backups do give you your full content, so all that material is not lost, it is just, for the timebeing, homeless)
On the plus side, most of my imagery tended to be 3rd party citings of image and video material, and in that teledyn.wordpress.com does a good job of preserving the illustrated nature of my blog posts; it is just unfortunate that with the loss of the blog.teledyn.com address pointing to that material, I have to start from scratch in building my referral reputation, and a further thorn that as I do so, I am really building the reputation of wordpress, so in a sense, there is a cost here, albeit a mild and invisible one.
And so on to teledyn.blogspot.com as the next candidate home.  It is Google, and so one hopes financially more stable than Posterous, but it is Google so one expects zero technical support, clunky outmoded acquired software (eg Google Sites that still uses pre-xhtml FONT SIZE tags).  So expectations are managed.

On a first try, not fully reading the warnings, I submit the exported WordPress xml to the online hosted converter -- the warnings say my file should be three times too big, and it returns a file twice the allowed size, but I import it anyway.  The import balks at a single posting from 2008 and skips a few comments but otherwise appears to be a success.
On inspection, however, the Blogger import has squashed all YouTube and Google Map embeds into odd looking BB-Forum (?) [T]tags[/T] !?  Now that is an anachronism, and a serious spoiler to a lot of postings.  Instead of being illustrated, my posts now present a puzzle, albeit a puzzle that can be solved, but the eye-candy is now elsewhere.
And there is another feature of that elsewhere -- where even WordPress had fetched and re-hosted image content, with the Blogger import, all images are links now, links back to WordPress!
Hoping this might have been data conservation by the hosted converter, I downloaded the current revision of the wordpress2blogger python script and run that, resulting in a somewhat larger xml file, and I clear the blog and resubmit this new import -- hundreds of errors pruning hundreds of articles, and many articles duplicated; apparently the hosted script and the downloadable latest revision are not terribly similar.  Once again, I clear the blog and then re-import the earlier broken but at least more or less complete script.
There is a moral: All formations are impermanent - Internet formations perhaps especially so

This body is seen to continue for a year, for two years, five years, ten years, twenty years, fifty years, a hundred years, and even more. But of that which is called mind, is called thought, is called consciousness, one moment arises and ceases as another continually both day and night.  (SN 12.61)

So closes and re-opens another epoch in blog.teledyn.com and for the moment I'm still not entirely sure which is the better venue, to transition to teledyn.wordpress.com and abandon the hostname to WP's, or suffer the outrageous misfortunes of a life hosted by Blogger, but the upshot for you dear reader is this confusing tangle of now triplicated content between here and there and the old there that will linger until April 30th when we'll all start to really appreciate what's been lost.


“Your body is like a dew-drop on the morning grass, your life is as brief as a flash of lightning. Momentary and vain, it is lost in a moment.” ― Dogen Zenji