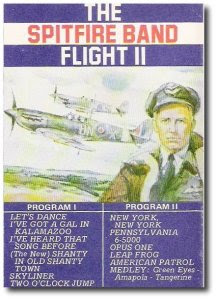 Flight II (1982)At a recent performance, an elderly fan lent us a stack of cassette tapes of Canadian swing and concert bands, among them several recordings of the legendary Spitfire Band; The band and its recordings are described at The Canadian Encyclopedia.com (http://bit.ly/ZHe5h):
Toronto dance band, formed in 1981 as a studio orchestra by the singer Jackie Rae, with the trumpeter Mickey Erbe as music director and arranger and the trombonist Laurie Bower as vocal arranger. With the success of its first LPs, The Spitfire Band (RCA KKL1-0432) and Flight II (RCA KKL1-0449), it began to perform publicly in 1982, making its debut in St Catharines, Ont, and giving the first of many concerts at Ontario Place. Rae has served as featured vocalist and master of ceremonies, and Erbe as bandleader. After a Christmas album that year, Home for the Holidays (RCA EP-102), it had LPs issued 1983-5 by Columbia (Flight III, PCC-80008; A Sentimental Journey, PCC-80097; In Flight, PCC-80106) and later by Attic (Swings Down Broadway, LAT-1230; Swinging the Movies, LAT-1234). A compilation, The Make Believe Ballroom (Qual RSPD-205), was issued in 1990.

Other public engagements have included many fund-raising events, performances at the CNE Bandshell, Roy Thomson Hall, the NAC, Lincoln Center (New York), and several appearances, as well as a residency 1988-9, at the Imperial Room of Toronto's Royal York Hotel. Initially the band's repertoire comprised Erbe's updates of swing-era classics ('Marie,' 'Tuxedo Junction,' 'In the Mood,' 'Pennsylvania 6-5000,' 'I'll Never Smile Again', etc) but came on record to include movie and Broadway themes, and other pop material. Personnel is not listed on the band's LPs but has included musicians from Toronto's jazz and studio circles - eg, trumpeters Arnie Chycoski, John MacLeod, and Dave Woods, saxophonists Bob D'Angelis, Steve Lederer, and Jack Zaza, and trombonists Bower and Bob Livingston.

This is first-class Miller-style swing all the way, expertly executed and updated to the 80's. The Spitfire Band may still be performing and recording so if you like this one, please show them some love: they still have an artist's homepage at arbproductions.ca for contact and bookings, and while Flight II appears out of print, they do have newer recordings available at Amazon.com.

Remember: We share because we want you to want them!
Posted by mrG at 09:16