A Jazzin' the Schools How-To

This is a question I have asked myself and wondered why, only I was wondering why years and years ago when Electric Miles was tantamount to heresy; today it is the standard soundtrack of most TV: 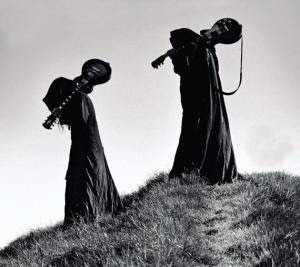 instead of thinking the kids will thrill to some Count Basie, how about appealing to them through the jazz they’ve already been exposed to? Where’s something like the Alice Coltrane program? Where’s the weeklong Electric Miles events? Why aren’t we taking advantage of the bridges that already exist? There’s obviously nothing wrong with Basie but you’ve got reach people where they’re at, not where you want them to be. They’ll get to Basie in their own time, provided you win them over in the first place. As Teachout wrote, “Any symphony orchestra that thinks it can appeal to under-30 listeners by suggesting that they should like Schubert and Stravinsky has already lost the battle.”

via The Kids Are Alright

There is an old joke in mathematics that defines a 'recursive' procedure as follows:

We all learn and change incrementally. This method is standard procedure in the branches of psychology we call 'change work': you cannot jump from here to the finish without looking at where you are and taking a first step toward where it is you want to go. Even if you're not precisely sure where it is you are going until you get closer to it.
Posted by mrG at 19:38