The Voyage of Bran 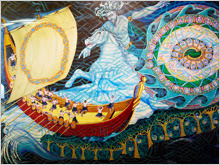 The Voyage of Bran: "???TWAS fifty quatrains the woman from unknown lands sang on the floor of the house to Bran son of Febal, when the royal house was full of kings, who knew not whence the woman had come, since the ramparts were closed."This is the beginning of the story. One day, in the neighbourhood of his stronghold, Bran went about alone, when he heard music behind him. As often as he looked back, ???twas still behind him the music was. At last he fell asleep at the music, such was its sweetness."

THE old-Irish tale which is here edited and fully translated 1 for the first time, has come down to us in seven MSS. of different age and varying value.