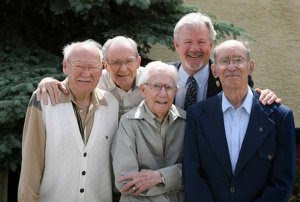 A picture of health:

"Murphy didn't realize it on the pivotal day of his RCAF medical, but the records of his height, weight, blood pressure and medical history -- as well as a then-innovative electrocardiogram -- would lead to his inclusion in a landmark medical study.

He was one of nearly 4,000 aircrew recruits who were tracked down after the war by Winnipeg's Dr. F.A.L. Mathewson and asked to have their military physicals become the foundation of the Manitoba Follow-up Study (MFUS).

The study, housed at the University of Manitoba's Bannatyne medical campus, is believed to be the world's longest-running continuous study of health and aging in a specific cohort."

That's Dad, second from the left. What I find really curious, however, is the way the article I had originally cited on Facebook was later politically corrected and then reposted under a different URL on the Winnipeg Free Press site, with the new Picture of Health headline (less factual, more fuzzy and emotional than "study in 60th year") and beyond that, notice how the content has been subtly slanted: In the new article each of the interviewed pilots makes this tagged on as if an afterthought:

With the study now looking at aging, the men are asked how they define successful aging. Analyzing their responses and mortality, Tate has statistically correlated a sense of contentment, feeling useful, staying physically active and having a positive outlook with a higher rate of survival.