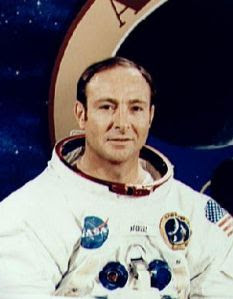 Apollo 14 astronaut claims aliens HAVE made contact - but it has been covered up for 60 years: in what seems like it should be front-page of a tabloid, Daily Mail Online writes "Aliens have contacted humans several times but governments have hidden the truth for 60 years, the sixth man to walk on the moon has claimed.

Apollo 14 astronaut Dr Edgar Mitchell, said he was aware of many UFO visits to Earth during his career with NASA but each one was covered up.

Dr Mitchell, 77, said during a radio interview that sources at the space agency who had had contact with aliens described the beings as 'little people who look strange to us.'"

George: "That was a UFO beaming back at ya, the government knows all about them. Ever since they came here they have been working among us in vast quantities ever since."

Billy: "You know what I think? I think that's a crackpot idea! I mean if they're so smart, why don't they just reveal themselves to us and get it over with?"

George: "why don't they reveal themselves is because if they did it would cause wild scale panic."

Billy: "Hey, I saw something man, but I didn't see it working here, you know what I mean?"

George: "It would casue a devastating blow to our system if people found out about them just like that. The aliens are so evolved you know, they don't have monetary systems, they don't have any leaders because each man is a leader. The result of all this has been that the Venutians, he he he ..."

George: "It would cause a devastating blow to our antiquated systems."

Wyatt: "How your joint George?"