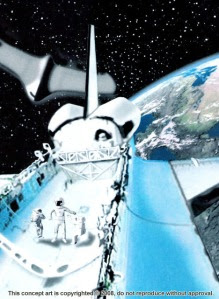 The Stargate Chronicles Clark C. McClelland writes: "I was the Director of the NICAP Unit-3 actual X-Files at Cape Canaveral and the Kennedy Space Center, 1958 to 1992! YES, the ACTUAL X-FILES!! Aliens ARE HERE!! They walk among US! They may be implanted into OUR various earth governments!!What I know, they would NOT allow me to publish! I have written at least three books to release the TRUTH to all of the HUMAN RACE! I was on the leading edge of this subject, and I have met with many NASA and other astronauts throughout the years I have been involved in the Military, NASA Space Programs, 1958 to 1992! I have heard many experiences of ETs having been seen on the Moon, etc., by NASA Astronauts and I relate these and more in my books."

The ET was standing upright in the Space Shuttle Payload Bay having a discussion with TWO tethered US NASA Astronauts. I also observed on my monitors, the spacecraft of the ET as it was in a stabilized, safe orbit to the rear of the Space Shuttle main engine pods. I observed this incident for about one minute and seven seconds.