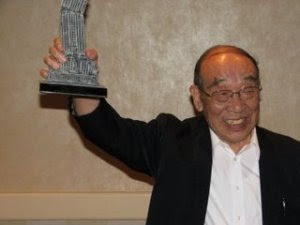 Armand's Rancho del Cielo: "Nakajima, who was the man in the Godzilla suit from 1954 to 1972, turned 80 years old today.Nakajima played several other monsters during his movie career including Rodan, Varan, King Kong and many others. He also became the choreographer of monster fights. He was honored last year at G-FEST XV with the 'Mangled Skyscraper Award.'"