Adventures on the Sun 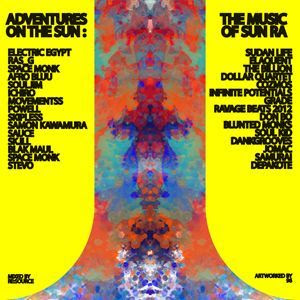 "It???s no surprise considering that reinterpretation has been a cornerstone of hip hop production since the beginning, when loops and breaks were getting chopped up. Today though the new generation of producers are taking things further thanks in no small part to the internet and modern technology allowing people to link together regardless of distance and make use of a wealth of recorded music.

"With this in mind, it was a surprise to see something pop up on twitter yesterday about a bunch of producers, including L.A???s Ras G, having released a mix of reinterpretations of Sun Ra. The surprise quickly turned to pleasure when I started listening to it. There isn???t a wealth of information about it, beyond a tracklist, some art (one of which is used in this post) and a link to a myspace page for Re:source who seem to be the mastermind behind this effort. Looking at the tracklist it features quite a few known names to us, such as the aforementioned Ras G, Powell from Paris, Elaquent from Canada and Ichiro from Tokyo."

via The beat generation interprets Sun Ra
Posted by mrG at 14:07